The Kunlun fight & Chan FC World Fighting Championship Dubai ended perfectly on June 25, 2022. The championship was sponsored by CoinW, the world's leading cryptocurrency exchange, and brought together internationally famous fighters to provide fight fans with a blood-curdling feast for the senses. After the competition, CoinW and Kunlun fight's co-branded limited NFTs were officially launched on Opensea, setting off a rush of purchases by users.

According to the official introduction by CoinW, the content of the NFT on sale is a collection of live moments of Kunlun Fight, including the famous Thai action actor and Asian international action star, Tony Jaa, WPMF Intercontinental Gold Belt, Muay Thai, WMO World Gold Belt, Jérémy PAYET. The 8 world-class fighting champions were in action. 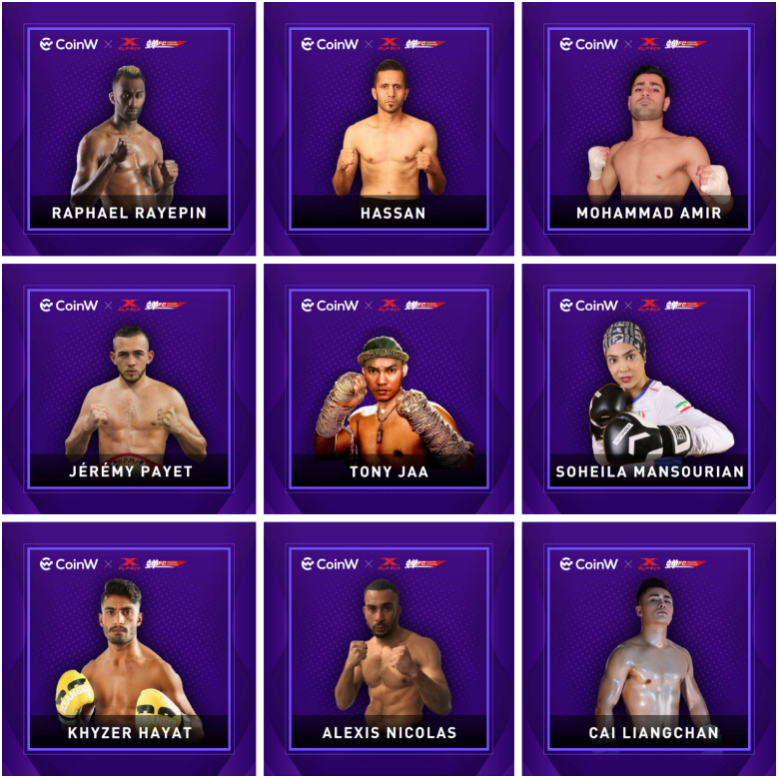 OpenSea is the first and the world's largest NFT trading platform, which accounts for almost more than 97% of the NFT trading market share. The choice of CoinW and Kunlun Fight co-branded NFTs for sale at Opensea also ensures the liquidity of these co-branded limited NFTs. More importantly, these co-branded limited NFTs have been authorized by Kunlun Fight officials and the participants themselves, which can guarantee the value to a certain extent.

with the crypto space on a more personal level. It puts cryptocurrency in front of millions of fans worldwide while bringing more exposure to both industries.

"NFT+Sports" is growing exponentially here exploration of "NFT+Sports" has already begun. At present, NFT has been widely used in various fields of the sports industry, and there are numerous sports organizations, enterprises, and stars who have entered the NFT space.

The NBA is perhaps the first institution in the competition. As early as 2019, the NBA launched the card collection game NBA TOP SHOT. Players only need to buy card packs, you can randomly get the NBA star's game highlights of the card NFT. After that, the soccer field of Sorare, UFC's NFT UFC STRIKE, Formula 1's Delta Time, and NFL's NFL All Day, were launched one after another. More and more top sports events are joining the NFT ranks. More sports stars are getting into NFT, which is not only a financial opportunity but also a fashion trend to play with. NBA superstar, Stephen Curry launched the NFT Series 2974 last December, which sold out five minutes after it went on sale. English footballer David Beckham filed a trademark application for Metaverse and NFT on April 19, 2022.

The naming the of Kunlun fight World Championship is also another initiative in the internationalization the of CoinW brand after the successful landing of the La Liga courtside advertisement. One is Kunlun Fight, which leads the global fighting development trend with high-quality competition standards, and the other is CoinW, which is committed to leading the new trend crypto-assets industry. The strong cooperation between two industry leaders opens a new chapter of cross-industry in-depth cooperation. After successive heavy operations, CoinW has become one of the cryptocurrency brands actively participating in sports events based on global compliance operations.

As the exchange brand that first sponsored Kunlun Fight, CoinW, which was established in 2017, has been deeply engaged in the crypto industry for many years early and is well known for its reputation. It has more than 30 self-researched security and risk control measures, and also cooperates with Knowtronics, Ari,yun, and Amazon, with a total of more than 100 security and risk control measures. Through strict technical standards and multiple risk control system support, it provides professional, s, safe and stable digital asset trading services for global users. In addition, CoinW also cooperates with Hyper pay, a multi-ecological digital asset wallet, to build the HyperLab digital wallet security lab, which is dedicated to developing various security frontier technologies for digital wallets to guarantee the comprehensive security of platform funds and user funds.

The "NFT+Sports" trend has also attracted the attention of Deloitte and PwC, the world's top four management consulting firms. In its Sports Industry Insight Report released in March this

year, PwC pointed out that the hottest trends in the sports industry in 2022 will revolve around NFT. Deloitte, on the other hand, said in its forecast report in March this year that sports NFT will exceed $2 billion in total sales in 2022. By the end of 2022, the crypto-collectibles audience is expected to increase by 5 million.

The essence of competitive sports is competition. Athletes continue to surpass themselves and present a wonderful scene, and these wonderful moments deserve to be remembered by history. Casting the wonderful moments into NFT, sports fans can collect them forever and bring more business opportunities to the event, and it is foreseeable that the connection between top sports events and NFT will be more common in the future.